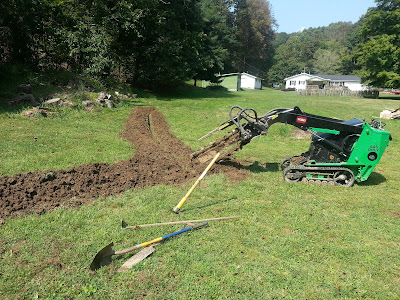 Labor Day was meant to celebrate the workers, and when there's a 3 day weekend in the summer, that means all manner of ADHDiY is bound to happen.

Weekends are great for DiY'ers, but 3 day weekends are even better.  We get to tackle on bigger and badder projects than the average weekend warrior, and when your ADHD is running high, DiY gets even bigger. Having a helper is even better!

The issue is the seepage of ground water into the crawl space of the addition part of the living room.
This was discovered after extremely heavy rains, and was initially thought to be just overflow from the rain.  A sump pump was installed and the waters were removed.  A fan was placed in the space to start drying it out.  However, after about 2 days of "fanning", a check on the status of the moisture left me bamboozled.  There was yet another 8" of water in the crawl space.

The crawl space of the addition was cut to be 24" below the bottom of the joists, allowing for easier access.  This resulted in about 16" of dirt over 250 square feet to be removed.

At the time of removal, it was the middle of winter, and any water seepage would have been frozen, so it was not known at the time that the water table was so high.

After much research and talking with WV neighbors, contractors, and others, I determined the best course of action was to dig a french drain to catch surface and sub-surface water coming off the hill as well as upstream from the house. 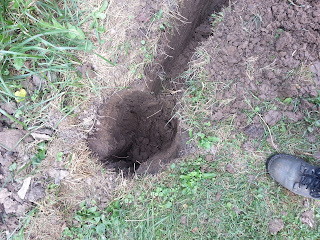 A pilot hole was dug to 28" uphill from the house, where the crawl space starts, and a bucket was placed to catch any surface water in the event of rain.  After 24 hours, and no rain, I checked the hole and found about 1.5" of water.  That confirmed that there was near-surface water seepage as well as the starting depth for my drains.

The plan is to have the drains "daylight" at the creek, allowing for water to flow the natural direction. 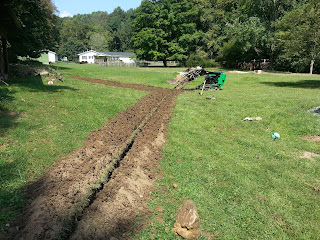 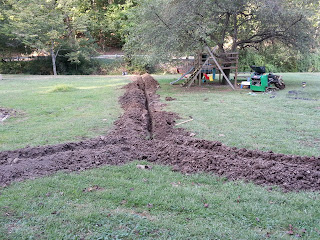 After the Y was cut, the main part of the drain was cut, while increasing the depth about 1/2" every 5 feet or so.  This averages about 1/8" drop for the 4" drain pipe,  The main line extended about 80 feet, so a total drop of 10" was required to allow flow.

Within minutes of cutting the ditch, water was seeping in, and within an hour, there was over 4" of water in the trench. 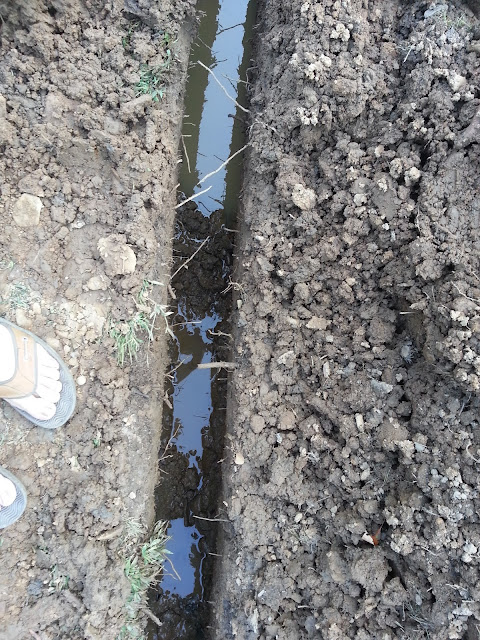 By the end of the 1st day, there was over a foot of water in the trench, starting about 18" from the top of the trench. 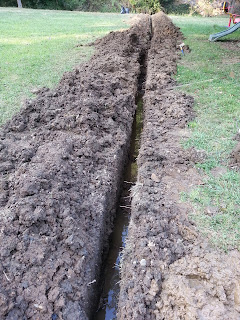 This confirmed that the water table itself was the culprit of the seepage in the crawl space.  While the drains have not been fully installed, they are being cleared this week and this weekend I should be able to have it ready for gravel.