Ah, my upstairs bathroom.  One of my longest-running projects of the Project House.
This was not the first project, but definitely my longest to finish.

It started out with a plumbing problem (as usual), which ballooned into an entire bathroom replacement.  Originally the bathroom was SMALL, I mean like tiny small, and not that the room itself was small (it was, after all, 7'x9'), but the layout was incredibly bad.  The toilet was next to the window, and shared the same wall as a 42" step in shower stall.  There was 20" between the stall and the vanity that was an old hutch that had it's feet cut off and back removed to allow for the extremely tiny space. The discovery of the plumbing problem came with putting in a new vanity. This particular one came from a big box store that was on sale for a decent price. It had the design elements that we were looking for and was small enough to fit in the current space. 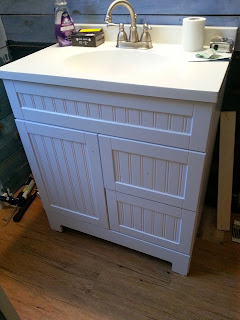 The vanity was small, only 24" wide, but fit within the space well.  The problems were discovered when the plumbing was being redone: 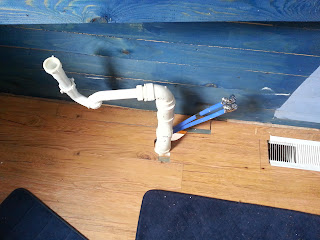 The p-trap was very oblong, and required removal of some of the finish floor laminate to get to the proper position.  When removing that, it was discovered that there were 2 runs of pipe, one for the toilet, and one for the shower/vanity. 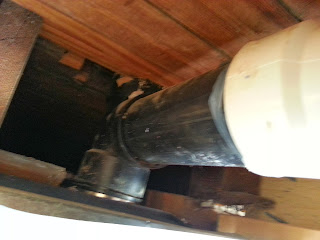 Upon closer inspection, the plumbing for the toilet was routed THROUGH the floor joists, and to accommodate,  the joists were cut and then shored up with ripped 2" boards. 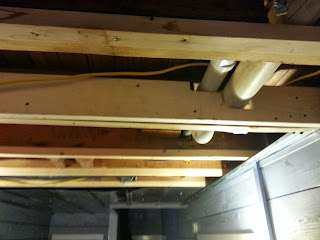 This falls directly into the "DO NOT DO" category! 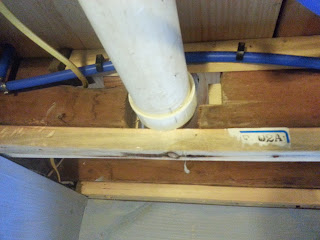 Joists that are cut as shown provide no structural support to the upper floor, and will eventually fail catastrophically, resulting in serious damage and potential injury. 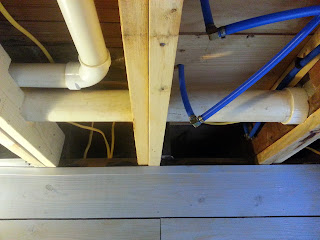 On top of that the water from the Vanity/Shower was routed a different direction than the toilet.  This required some investigative work to determine where it exactly went. 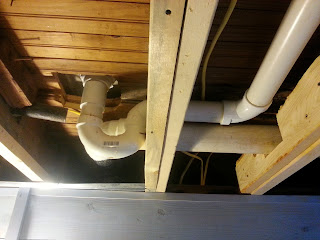 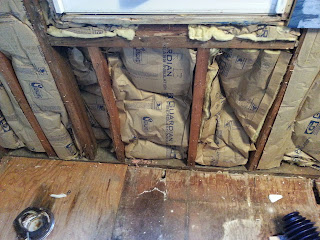 Extensive water damage was discovered on the subfloor due to a leaky drain as well.


The below video clip shows that the only thing holding the joists together is the flooring itself: 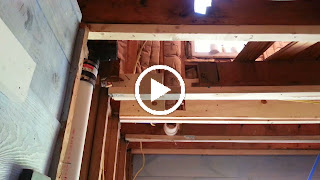 Following the shower/vanity drains led to them being tied into the downstairs bathroom shower/vanity, which flowed directly outside and into the neighboring creek.  This is a code violation, as well as a general health hazard.  There was no vent stack to the plumbing, which allowed for the buildup of sewer gasses within the house. 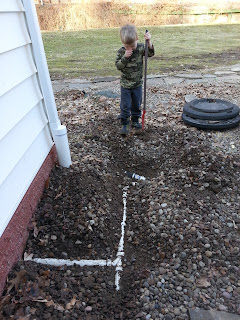 This required a complete overhaul of the upstairs bathroom, including a complete removal of all compromised floor joists, installation of a new vent stack, new floors, new walls, new shower/tub, and new medicine cabinet. 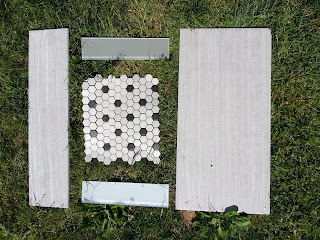 The design we chose for the floor was based on smaller mosaic floor tiles found in the 1920's. With large 6x24 and 12x24 tiles for the shower surround.  The glass accent tiles ended up not in the design, and we did incorporate some small mosaic tiles in the shower as well. 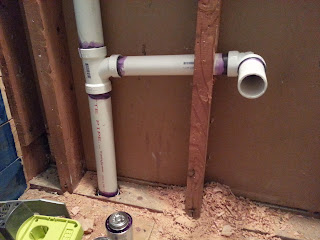 While the vanity remained in the same location, a new vent stack was installed.  The bathroom itself was expanded upon, adding an extra 30" to the width of the bathroom.

When removing the common wall between the master bedroom and the bathroom, it was discovered that the termites that were active spread MUCH farther than initially expected.  They spread from the ground floor up through the second floor, ending in the attic.  The damage to the trusses were not extensive, and mainly superficial.  The damage to the multiple layers of wallpaper attached to the original drywall was much more dramatic....

Once the wall was removed, a new wall was built.

The new wall was insulated with r13 for sound.  The new vent stack went in and the plumbing for the toilet and the bathtub was routed through the utility chase in the Living Room. 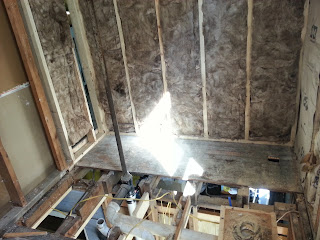